On Wednesday 8th November 2017 ten members of the WKRC went to the world famous Lea Valley Velodrome on the site of the 2012 Olympic Park in Stratford E15.

Some members used the excellent transport facilities whilst others took advantage of the free four hour parking included in the entry ticket. We were going to take part in a track tester event which had been planned for some time. We had decided to book the last evening slot between 8pm -10pm as it meant traffic was lighter and those working could make the event in good time. At the Velodrome we had a chance to look around the famous track and at the gallery of photographs and memorabilia of many riding stars who had won trophies on the track.

Then we all changed into our WKRC kit and under the instruction of a British Cycling coach our instruction began.

I can only speak from my experience as a complete novice to track riding and riding a fixie with no brakes it was a steep learning curve in more ways than one! But our  coach was very friendly and professional and soon we were equipped with bikes and took off onto the track unfortunately without the roar of a large crowd. Although Mack did turn up later and gave us some verbal encouragement. The next two hours were very enjoyable and I think I can speak for all of us to say we had a very informative session and the rides were challenging.

No incidents or crashes and plenty of good humour and soon the two hours had gone by. The cost was Â£22.50 per person plus Â£12 bike hire and in my opinion good value for money too. Perhaps next year if we have enough support we can book another session. 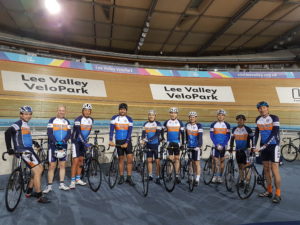