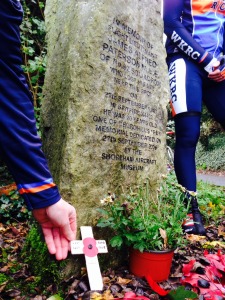 Incorporated in to our weekly training ride on the 8th November , six members of the Club visited memorials to downed RAF fighter pilots from the Battle of Britain. We learnt of the sites from the Battle of Britain museum in Shoreham where we often stop on the training rides and make use of the café there. The memorials we visited are in Court lodge Farm, Warren road, Chelsfield and Sparepenny Lane, Farningham. If you get a chance, try to make a visit and pay your respects.

Crosses were placed at each memorial, thanks to Alan Brown and the Swanley branch of the Royal British Legion, and we remembered the pilots with a few words  and a minute silence and reflection for the sacrifice they made.

My thanks to Steve & Josh Harris, Andrew & Thomas Floyd, Mark Morrison and Neil (who joined us at the meeting point) for taking the time and making it a successful occasion. 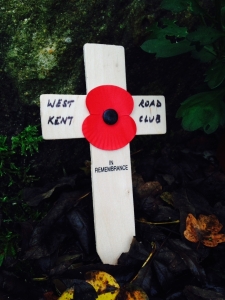 More pictures can be found in the gallery.