Lol and myself got down to Dartford park at 9:50 to set the stand up as the cars had to be gone at 10:30. As it was a bit short notice we had to improvise on what we had, we would like to think we did a good job. 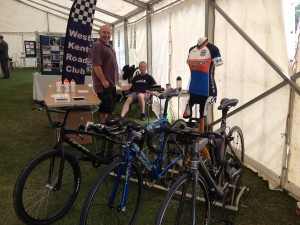 With one of our new flags outside the tent to show people where we were and hopefully to bring them flocking in.

The show officially started at 12 the first few hours were slow with a few inquires but a few people seemed interested, it got busy around 3pm but by that time there was 4 of us on our stand with Alex who came down for an hour with Kirsty and the kids at midday and ended up staying till 4 and Mark Morrison who came down after work.

Apart from the heat it was good and hopefully productive with at times all 4 of us busy talking to people, lets hope today is the same the only difference being we have to give a talk to an audience as part of being allowed the space for free, i have drawn the short straw but with the help of Alex, i have a sort of script to use.

The pair of us managed a lie in as we did not have to be there till 11am as there was something starting at 11:30, the only difference to the stand was we added some old shirts from various charity rides.

We were joined later on in the day by Alex, Mark and Steve Trudge who had come straight from the club run still dressed in full kit which looked good and made us stand out a bit more.

It was a fairly busy day with a lot of positive enquires, so we can only hope these turn into at least one new member.

The only downside was as we were packing away the thunder arrived with the pouring rain, so loading was delayed whilst the people hurriedly cleared the area, lucky for us Roy Siggs and Matt turned up to help us pack away.

On the whole we think it went well and can only look forward to next year and making it bigger and better with a hope to win the mayors choice of stand award.

NB – Quick update we have had our first enquiry coming from the show.