Let me start by saying you could not have had a nicer day for our first road race, perhaps if I’m being picky it was a bit too warm well for me anyway.

We had use of cyclopark from 9am and by the time i arrived at 9:20 Eddie and John had already set up the registration table and were busy signing the the track and shifting cones to block the parts we were not using, so the rest of the guys started arriving and after a short chat and the now compulsory purchasing if tea it was time to sign in and pay your money. 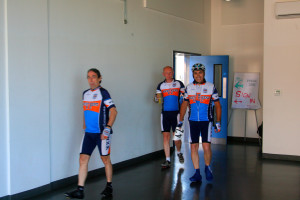 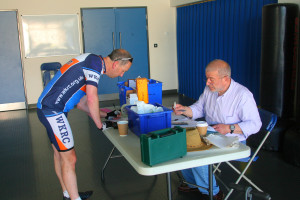 It was then off for some practice laps to work out lines and gear’s and a time for myself to grab a few photo’s to check light levels, then my turn for a few laps then back in for another chat before heading out for one quick lap then form up for the start and some words from Ed about the time will be taken as an average of the 1st 3 laps then the number of laps worked out for the set period of an hour, and for us all to stick together for them 3 laps.

We were off, 1 lap gone so far nearly all together except yours truly who was about 20mtrs of the back, which was to be fair always going to be the case, and so we settled into a rhythm and kept plodding away, after a while i was overtaken for the 1st time by Albert who had already opened up an advantage on the others, by the second time he overtook me he had a big lead which would proof to be unbridgeable so it was left to Lol, Matt and Little Gary to fight it out for effectively 2nd,3rd and forth on the road but 1st,2nd and 3rd in their class.

It seemed like an age for me but soon the time was up and shock i had only been lapped 3 times, but all along i had been working to my own race against myself sticking to a plan of 85rpm cadence set by my coach Alex.

And The winner is?

After a quick rest and some more photos being taken for the website it was on to the results.

As predicted and no real surprise it was Albert who took the overall victory and came first in the senior class. 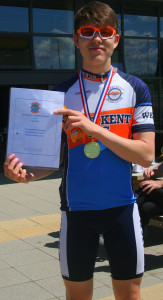 The veteran class was won by Matt 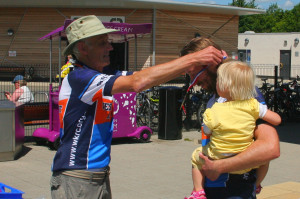 Followed in second by Lol 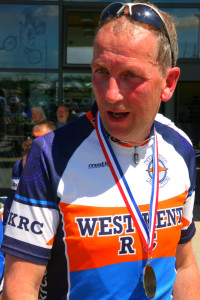 With Little Gary in 3rd 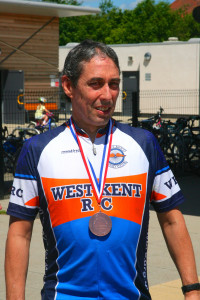 There was one more prize a bottle of champagne kindly donated by Alex that went to the most combative rider which went with no surprise with his breakaway ride to Albert.

That brought us nicely to the end of our first club road race championships, heres looking forward to competing next year with Albert defending his title, it only leaves me to list the full results.

A big thanks to all the staff at Cyclopark for putting the event on, Eddie, John and Peter for running the show,timing and registration and all the members not riding who turned up to offer support.